When Chris Murray, Richard Harper, Matt Jernigan, and I got together to do an T.I. improv around the concept, “Cover Rolling Stones songs so obfuscatingly that they become unrecognizable,” things didn’t go as planned. While idiosyncratic, our covers are also VERY recognizable. Instead of mystifying your ears, we rocked your socks off. And because (as T.I. participant Pimpdaddysupreme once told me) The Rolling Stones are litigious bastards, we can’t put this out as an improv, entertaining as it is. The last thing we need right now is to get kicked off iTunes. So instead, we’re releasing the songs as a New Years Special FREE DOWNLOAD. Our gift to you.

Thanks to Chris Murray for mastering the songs and coming up with the band name.

You can download or stream the individual songs below or download all songs in this convenient zip file. 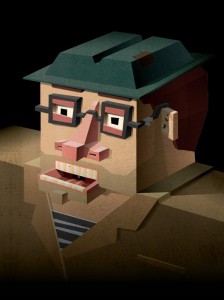 Theatre Intangible would like to unveil our artist showcase series with a great interview and live performance from Nashville’s own Square People.   Square People is a one (occasionally two or three) man army, busting up your speakers with ribald beats and surrealist poetry, diced up and run through various forms of tape and squash-bit manipulation.   I sat down with Chris Murray at JJ’s Market to discuss fair use, sonic texturism, Kate Bush, and more.  The crowd met our unannounced live performance with a mixture of indifference, outrage, and sub-mild curiosity.  For one lucky lady, the show continued on into the night . . .  in the women’s bathroom at JJ’s Market and later at the Square People mansion.  When you hear this episode, you’ll wish you were her.

We recorded the four live tracks on my Tascam 80-8 tape recorder.  The results — having been put through the ringer of digital to tape to digital to tape ad infinitum — are about as low-fi as it gets.  And that’s not necessarily a bad thing.  The show’s highlight for me is Square People’s rendition of Mario & Gucci Mane’s Break Up.  Follow that link to hear the original, then listen to the version herein; and you’ll start to understand the particular fucked-up genius that is Square People.

Chris Murray on 4 track and vocals.  Matt Jernigan on Chaos Pad and vocals.

Like what you hear?  See Square People live!  They’re playing March 13/14 at Little Hamilton for benefit for a new P.A.  They’re also playing March 27 at the  Fashion>Fascism show at the Open Lot.  Hope to see you at one of the shows!