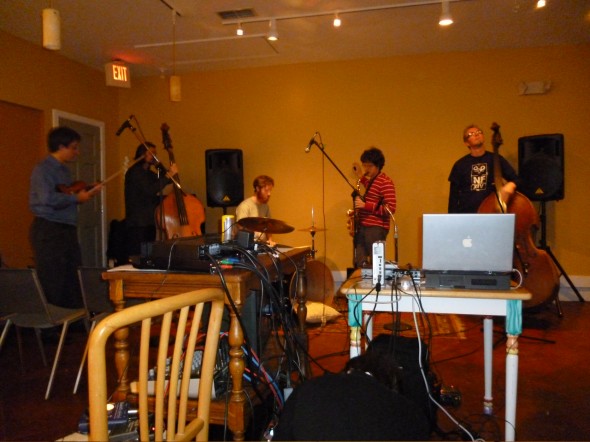 I recorded the episode live to 2 track at the Gallery F closing reception on February 26th, 2012. Billed as Theatre Intangible Live, the performance was downright spine-tingling. Thomas was at Gallery F on tour, promoting his new video I, a collaboration with video artist, Jonathan Jindra. We were very lucky to have him participate in the improv!

Thomas Helton is a composer and experimental jazz double bassist from Houston, Texas. He plays like a man possessed, lost in communication with some invisible entity, blind to everything but his instrument and the music. Thomas appeared on one of my favorite T.I. podcasts to date, Podcast 9 –  Crow Helton Rauh Schenker.

There were several other great performances at the Gallery F closing show, and, as usual, I recorded all I could. I’ll post them soon and link to them here. (Watch this space.)

If you like the show, tell a friend or leave us feedback on iTunes. Here’s Ghosts in the Hollow. Thanks for listening!

I know that I have a habit of saying each show is my favorite . . . but really now, this show IS my favorite thus far.  Doublebass avant-jazz artist Thomas Helton joined us for an improv with ~ORE~ regulars Lawrence Crow, Charlie Rauh, and Craig Schenker.  Because Thomas was only here for one day, we pre-recorded this episode in my basement 10 days before the original WRVU air date of June 21st, 2009.  Consequently, it’s the first show where the players were at least a little soused.  (Charlie now loves Hopslam beer.)   We didn’t have a theme per say, just the cues to play texturally and in ways the instruments weren’t necessarily made for.  This happened to be a strong suit for every one of the players.  This show is a textbook example of musicians playing experimental music musically and LISTENING to each other.  Helton on doublebass, Crow on violin and detuned autoharp, Rauh on guitar, Schenker on flute and saxophone.

Lawrence Crow just released a new album, and you can download it for free at his website.  I’ll be reviewing the album on this blog very soon.

For 15 years Thomas Helton has laid down basslines for jazz ensembles in Houston and around the US. He has appeared  at the Montreux Jazz Festival, and has recorded with Joe LoCascio, Carol Morgan, Chris Connolly, Smitty, Kevin Patton, & Cindy Scott.
Thomas brings all of his passion and experience for jazz to the table when it comes to his other half, avant-garde music. Early in his jazz career, Thomas was inspired by the sounds of John Zorn and Peter Kowald to venture outside mainstream musical bounds. This journey began with the Rosta Jazz Avengers, a Houston-based quartet all about free improvisation and sonic exploration. Thomas quickly jumped into composition, beginning to develop a style that combines thematic composition with free improvisation, a sort of loosely controlled writing style showcasing his hand-selected performers.
Thomas has released three albums to date. “Good Robot” (2007) and “Experimentations in Minimalism” (2006) feature compositions for small ensemble. “Doublebass” (2003) is a collection of live, freely-improvised solo performances. Thomas also appears on the 2003 Norcal Noise Fest compilation CD, as well as the KUHF “The Front Row” 2006 compilation CD.

Without further ado, we bring you Crow Helton Rauh Schenker: