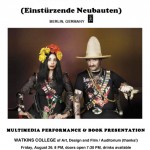 In 1981, EINSTURZENDE NEUBAUTEN tore a hole in music. Their 1981 album Kollaps is a giant “fuck you” to the prevailing winds. . . or any winds for that matter. Using hand-made instruments, electronics, power tools, scraps of metal, and manipulated tape; the album feels more at home alongside STOCKHAUSEN and JOHN CAGE than the genre eventually known as post-industrial. Throughout the years, the band continued to break new ground and demolish the old, each new album wildly different than the last. In 2011, they retain that pioneering spirit.

ALEXANDER HACKE was there from nearly the beginning, joining the band a year before the release of Kollaps at the ripe age of 15. On Friday, August 26th, he will perform at Watkins College of Art & Design alongside his wife, artist and filmmaker DANIELLE DE PICCIOTTO. Danielle is an accomplished artist in her own right. The event press release says it better than I could:

Danielle de Picciotto will be reading from her memoir, The Beauty of Transgression, and showing one or two of her short films. Her partner, Alexander Hacke (Einsturzende Neubauten), will accompany.

The American artist Danielle de Picciotto moved to Berlin in 1987. She was there when the Love Parade was founded and infamous clubs such as Tresor and E-Werk opened their doors. For decades, she witnessed up close the upheaval in th…e city and the evolution of its underground from post-punk through techno to the mixed experimental creativity of today. She was a part of this transition and experienced how societal changes influenced and changed the city and its inhabitants over the years.

The Beauty of Transgression is Danielle de Picciotto’s memoir of Berlin. The book brings together her accounts of musicians, fashion designers, and club owners as well as other artists and their milieus with unique first-hand descriptions of milestone places and events. It is not only a fascinating collection of stories about key individuals, but also gives an authentic and detailed overview of why Berlin has become one of the most appealing metropolises for creatives from around the world.

Danielle de Picciotto’s intimate text and personal selection of images penetrate through hype and commercialization and make The Beauty of Transgression a uniquely genuine documentation of the creative history of Berlin’s underground.

Folks, this is a big deal. If you fancy yourself a student of contemporary art and music, you really can’t miss this one. Doors at 7:30pm, show at 8. $10.00 at the door. Free for Watkins’ students with ID.

This event is sponsored by The Open Lot in partnership with Watkins College of Art & Design. 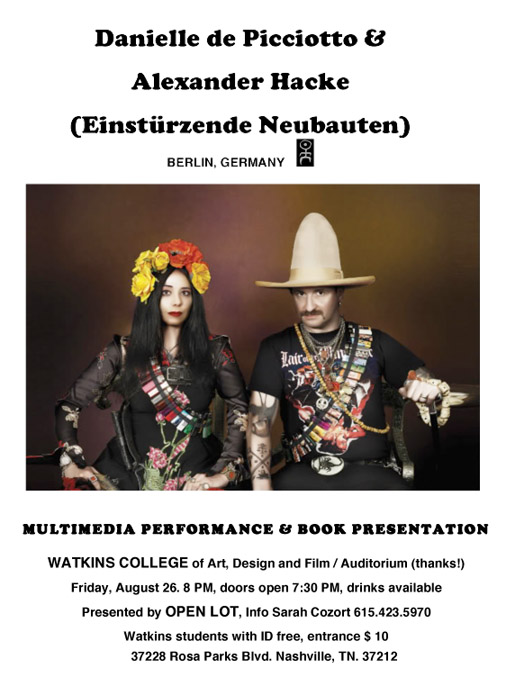