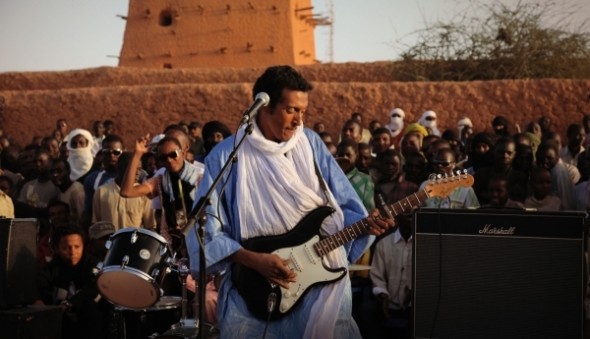 World music superstar guitarist BOMBINO from Agadez, Niger will perform in Nashville on Tuesday, May 1st at the VFW Post 1970! I really have to hand it to CHRIS DAVIS for continuing to organize amazing nights of music in Nashville. Also performing are THE CHERRY BLOSSOMS, and WILLIAM TYLER.

Bombino’s electrifying jams capture the spirit of resistance and rebellion while echoing with guitar riffs reminiscent of fellow Africans Tinariwen and Ali Farka Touré not to mention rock and blues icons such as Jimi Hendrix, John Lee Hooker and Jimmy Page.

Bombino was born in Tidene, Niger, a Tuareg encampment outside of Agadez. Following the outbreak of the Tuareg Rebellion in 1990, Bombino, along with his father and grandmother, were forced to flee to neighboring Algeria for safety. By 1997, Bombino had returned to Agadez and began life as a professional musician.

Filmmaker Hisham Mayet managed to track down and record Bombino and his electric band in 2007 during a wedding performance. Those recordings, along with several acoustic performances in the ‘dry guitar’ style, can be heard on the Sublime Frequencies’ 2009 release, “Group Bombino – Guitars from Agadez, vol. 2.” Later in 2007, tensions grew again in Niger and ultimately erupted into another Tuareg Rebellion. The government, hoping to thwart the rebellion in all its forms, banned guitars for the Tuareg, as the instrument was seen as a symbol of rebellion. Additionally, two of Bombino’s fellow musicians were executed, thus forcing him into exile.

In January 2010 Bombino was able to return to his home in Agadez. So as to celebrate the end of the conflict, a large concert was organized at the base of the Grand Mosque in Agadez, having received the blessing of the Sultan. Bombino and his band played to over a thousand people at the concert, all dancing and celebrating the end of their struggle.

While Bombino lived in exile in Burkina Faso, filmmaker Ron Wyman, having heard cassette recordings of his music, decided to track him down. Wyman encouraged Bombino to properly record his music. Bombino agreed, and the two of them produced an album together in Agadez. The recordings culminated in his album Agadez, released in April, 2011 which debuted at the top of the iTunes World Chart.