In keeping with our Nashville Venue Spotlight, tonight we profile Betty’s Bar & Grill, an unassuming little cash-only sports bar on the west side of town.  In the last few years, with no web site and no advertising, Betty’s has managed to attract a loyal audience for noise, experimental, lo-fi folk, and rock shows.  I was first introduced to the bar a few years ago when T.I. participant Anderson Cook called me to say, “Thurston Moore is playing a noise set at Betty’s!”  I rushed over to find a swarming mass of people surrounding a guitar-wielding Moore.  Next to him wailing on a am/fm-radio-embedded Fender Squire stood the woman responsible for the Thurston Moore booking, largely the force that transformed the little sports bar into an experimental mecca: Leslie Keffer. 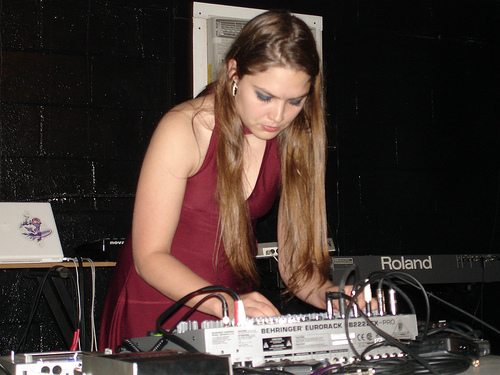 Leslie began making noise music in Athens, Ohio in 2002.  Her instruments include cassette tape decks, guitars, and various forms of electronics.  Leslie has opened for Sonic Youth and played New York’s No Fun Festival, All Tomorrows Parties, International Noise Conference and festivals around the world.   She’s released albums on Thurston Moore’s label Ecstatic Peace, Lost Treasures of the Underworld, GMBY, ijustlivehere, Tangled Hares, Tusco Embassy, Scumbag Relations, and many more.  She moved to Nashville a little over three years ago, got a job bartending at Betty’s, and started booking shows there.

In the Theatre Intangible interview, Leslie and I chat about Betty’s, the Nashville noise scene, the creativity behind experimenting, and more:

T: What was your general impression of the noise/experimental scene when you first moved to Nashville?  How has it changed since then?

L: I chose to move here because when I was touring and I would play here, I always liked the laid back vibe.  I also was into how many ladies were doing stuff here.  I’ve met a lot of different people over the last few years who I didn’t know when I moved here.  I guess the only thing that is really different is that I feel like I am more involved.  Also when I moved here, Ruby Green stopped having shows, so everything was happening at houses.

T: Where are the best house shows for noise and experimental?

L: I know Kelly Shay Hix still has house shows. The Green Womb and Sean Collins used to have a ton of shows. Maybe when Val (Unicorn Hard On) and Ren (God Willing) move back in July, they will have some junk pizza throwdowns!

T: How do the noise scenes in Athens and Nashville compare?

L: The Athens, Ohio noise scene when I lived there was really small.  It was me and a hand full of other people who worked really hard to be able to have shows and bring people in.  We weren’t well received, and I think a lot of people thought our music was a joke.  Since I’ve left I hear they even have an Athens Experimental Music Festival now!  So I guess our hard work there was worth it.  In Nashville there seems to be wider range of people who really appreciate this kind of music.  Everyone works really hard to make these shows happen.  There’s a lot more teamwork going on here then there was in Athens.

T: How long have you been booking shows for Betty’s Bar & Grill?  What types of music are you looking for?

L: I would say I’ve been helping with shows for a year and half or more.  Before I worked there I helped set a lot of things up.  As for types of music. . . any really.  I prefer the weirder, more obscure.  But i don’t want to shut out other types of music. . . I’ve been there.  So I may hate your band, but if you are nice and want to play, I will set something up for you.  I don’t want Betty’s to be a place that only has certain types of music or people playing there.  I think when a bar or club does that, it starts to suck.  I like to interact with people from all walks of life.  I like the fact that at Betty’s you can do almost anything.

T: If a band wanted to perform at Betty’s, how would they go about submitting their work?

L: I wont listen to your CD or check out your Myspace.  My pet peeve is when people call the bar asking about booking because they heard it was cool or an easy place to get booked and they have never even been to the bar.  It’s the first thing I ask!  Come down, meet me, check out the bar, get a PBR and a burger, and feel the place out.  So, yeah, just come down, introduce yourself, and we ll see what we can do.  I always tell people the crowd I’ve built up isn’t going to be into your singer songwriter stuff or your metal band or your this or that.  I tell people we do more experimental/noise/improv than anything, so if you want to have a good show, you need to bring your friends!  Betty’s feels packed with 20 people.  I want you to have a good show, so if I come off harsh, that’s why.  I’m just not going to book someone locally whose never made the effort to come in.  Touring bands usually contact me or a friend, and that’s how that happens.  Chris Davis, Bridget Venuti, Scott Martin, and William Tyler set up a lot of shows at Betty’s.  We all work together; its never just me.

T: I don’t think I’m being controversial when I say that Nashville is not a forward-thinking music town.  Is that a benefit or a hindrance?

L: Honestly, I really only surround myself in Nashville with people who are (forward thinking), so I can’t say.  Even the old school regulars at Betty’s who aren’t into the stuff I book still support us and are glad to see the bar doing well.  It’s probably a benefit because I like how its still seems ‘underground’.  It’s a lot of friends just coming down on Tuesday night and playing for each other.  I’m more into that than anything. 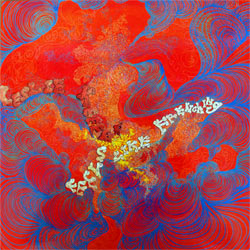 T: I’ve seen you play a few times, and I’ve heard a few of your recordings, including Feels Like Frenching on Ecstatic Peace.  Each performance was unique to itself.  The show you did at Betty’s with Scott Martin for example seemed to lean on the prettier, more delicate side of noise.  The Buzz & Click performance at The End on the other hand was pure, overlapping walls of dirge & drone.  Yet I do see a few common threads.  The texture of a sound seems very important in all your work.  Superficially, your work might seem repetitive and non-changing, but on closer listens, there’s a great deal of intricacy and change hiding in the corners.  Your thoughts on all of this?

L: I really strive to keep changing and growing with my music. I used to play all am/fm radios before moving to Nashville.  When I moved here there were no static stations!  I had to reevaluate how i was going to play.  That’s when i started prerecording things on tapes and playing the same way I did with radios — just with these different sound tapes I made.  This led me to realize I could compose and arrange pieces instead of just improv-ing.  (There is still a lot of improvising in my work.)  Then I started working with beats.  My next Ecstatic Peace record is a dance record.  I feel like I keep developing my music even though i think my sound/style is pretty recognizable.

T: You work with both new and old technologies.  I’ve seen you play Moog synthesizers and cassette Walkmans coupled with Kaos pads and other electronic digitalia.  What attracts you to certain types of equipment over others?

L: I decided to try a synth…I got a Guitar Center card.  I play other things too that I don’t play live because i record them to tape. . . like an Akai MPC or guitar or air organ.  I never learn how to really use the equipment.  I think my lack of knowledge leads to more creative channeling of the instrument, like the drum machine for example.  My beats make no sense, but that’s what makes ’em sound good to me.   I’ll try to play anything.  I just feel it out. 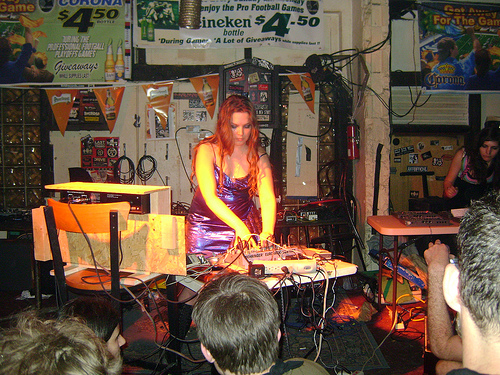 T: Cassette machines are a big part of your work.  Can you talk about how you incorporate them into your sound?

L:  I just play in my room, make a loop I like, record it for ten or fifteen minutes on a cassette, and that’s it!  When I have a bunch of tapes made I sit down and play a set.  That’s where the composing or organizing comes in.

T: When I hear your work, I’m reminded quite a bit of Japanese noise innovator Merzbow and also of Negativland‘s the Weatherman in his fascination with the sound of lawn mowers and Roto-Rooters.  Can you talk about a few of your influences?

L: My main influences are Kate Bush, Madonna, David Bowie, Sonic Youth, Bjork, Fleetwood Mac, Lady Gaga, any popstar like Britney, Mia, Katy Perry, Kelly Clarkson, Ke$ha.  God, I wish Ke$ha would play at Betty’s!  If you play at Betty’s, I will play this kind of music between bands.  Beware.

T: What advice can you give to young performers just starting out?

T: Many of the experimental artists I’ve talked to aren’t necessarily making music as a reaction to their influences or as a path to fame and stardom.  Instead, they are often motivated by a real fascination with sound or a maker’s urge to create — be it original instruments or new sonic structures.  Would you say experimental music is generally more creative than other genres?

L: I don’t know that its more creative; I think maybe it just allows more room for it.  There’s no label to please or radio audience to win over.  It’s just a little bit more raw or in your face than a super pop song.  But top 40 music is getting weirder….i mean Ke$ha?  When did the music industry start making number one hits with ‘I like your beard’ spoken at the end?  It may seem dumb, but i think its awesome.

T: When I first moved here, I had a very hard time finding other experimental artists; and when I did, they seemed to exist in little patches unaware that the other patches existed.  That seems to be changing with more venues such as Betty’s, Open Lot, and Little Hamilton booking challenging works.  Do you feel Nashville has yet built a real noise/experimental community?  Where do we go from here?

L: Our community is real and big!!!!!  My band The Laundry Room Squelchers do the International Noise Conference tour every year here or in Europe. 15 min sets, no drone, no laptops.  We’ll see 30 bands a night.  Basically, we see every city’s scene.  Nashville had as many people playing and hanging as anywhere else.  We should be proud!  As long as we keep supporting each other and coming to shows (paying for shows and playing for free!), our community will continue to grow.