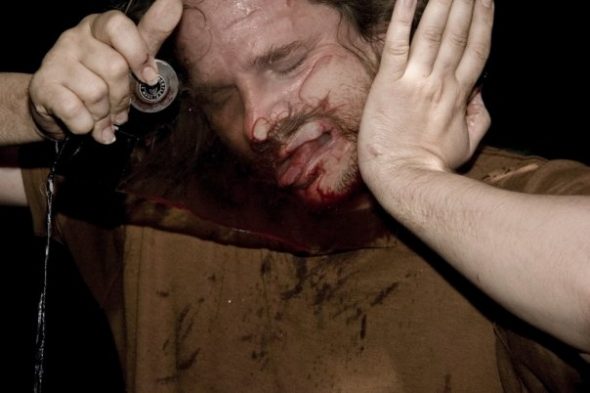 The fest takes place at Betty’s Grill on August 14 through 16. FMRL Arts is taking the unique approach of time-releasing the lineup, one festival-day at a time. Thus far, all we have is the lineup for day one, which is subtitled “Time Fades Away.” Keep checking the FMRL Arts site for updates on days two and three.

But the day one lineup? It’s spectacular.

First off, we have Sidney, Australia based audiovisual artist Justice Yeldham who is one of the most creative people alive. At the fest, he’ll be performing with broken pieces of glass and contact mics. He also creates pinball machines where the ball strikes guitar strings, piano strings, and tuning forks and remote-control car races where the cars “play” records doubling as the racetrack. The drivers sit in repurposed racecar game cabinets. They control the rc car through the game cabinet steering wheel and view the track through the monitor, which broadcasts the rc car front camera. It’s a brilliant idea, and I won’t be surprised if this type of racing becomes a phenomenon around the world.

Next up, we have . Update: Saunders had to cancel. In his place is the artist Depths & Chained. Of him, FMRL states:

Inspired by the music of Henryk Gorecki and Gyorgy Ligeti, the regal melancholy of seminal second-wave of black metal records, the work of ambient composers Eliane Radigue and William Basinski, kosmiche music, classic harsh noise and the churning, pulsing fervor of Brighter Death Now, Depths & Chained serves as an exploration of the space in which these influences can co-exist.

Then there’s Pico Dorado, Scott Bazar‘s method for musical improvisation where each performer is assigned a color.

Finally, we have Cleveland, TN solo artist TORSCHLUSSPANIK, which is a German word that has no English counterpart. It literally translates to “gate shut panic” and speaks to the fear that time is running out. Her music incorporates heavily-distorted found sounds cut up into audio assemblages. Check out the stream below.