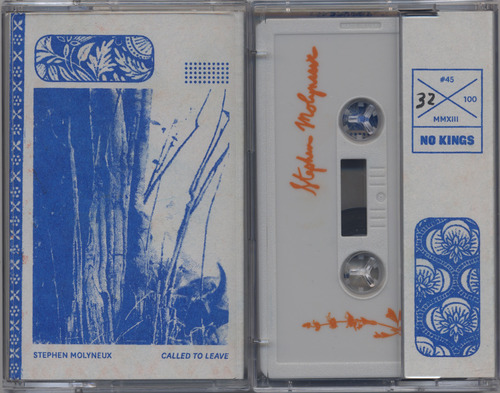 Stephen Molyneux, founder of No Kings Records, member of Horsehair Everywhere and Theatre Intangible participant, is performing tonight at Noa Noa in support of his new album “Called to Leave.” Unlike Molyneux’s recent experimental releases, this one is a collection of songs.

This world traveler, professional gardener, poet, amateur ethnomusicologist, and No Kings co-founder has, at long last, collected his best song pieces (which move in and out of traditional American folk motifs) into a heart-shaking and catchy album. From murder ballad to chord organ interlude, themes of water and work, these atmospheric one-mic recordings of Stephen’s magnetic voice vibrating the floorboards of his Nashville home overflow with emotion and will have you hitting that rewind button over and over. The best. Edition of 100 pro-dubbed chrome, imprinted tapes, risograph artwork. For your convenience, you can stream the whole thing here.

Also performing is one of my favorite Nashville artists, Renee-Louise Carafice. In the 2011 Nashville Scene Rock n’ Roll Poll, I selected her as my favorite discovery of the year. This will be Renee-Louise’s first show with a full band in Nashville. Square People Jazz Maturity’s Tommy Stangroom will be on the drums.

Check out videos of Stephen and Renee at the end of this post.