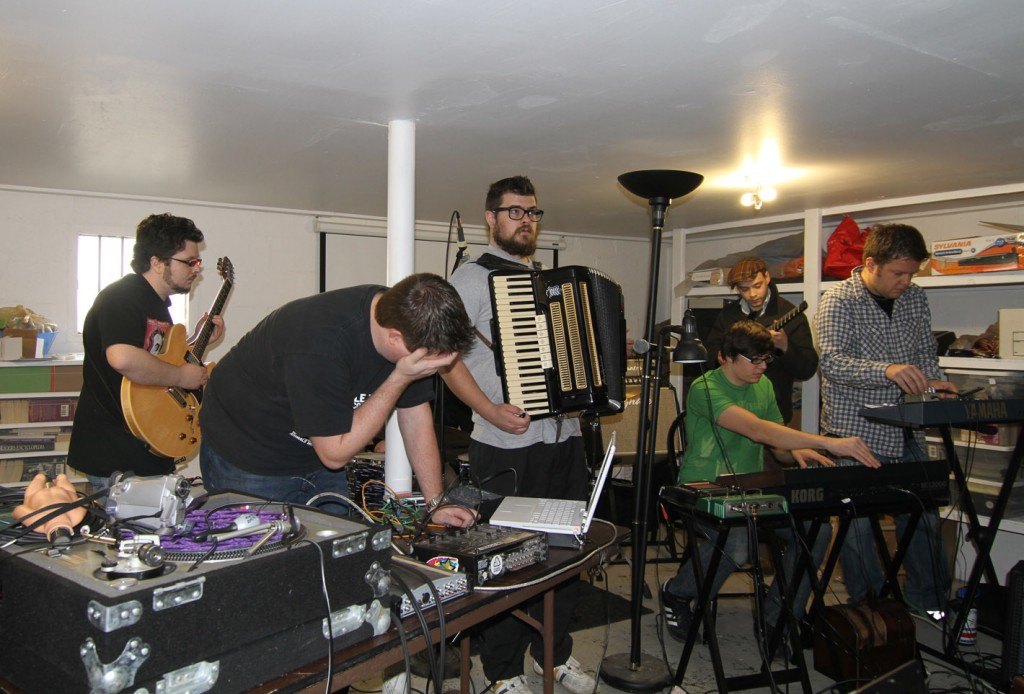 With our recent pick by the Nashville Scene as Best Podcast, I figured we might attract a few new listeners. (Hi, new listeners!) With 68 podcasts to choose from, where to start? Worry not. Here are 15 episodes that represent us at our best, weirdest, funniest, or most interesting. We’ve included highlights and milestones, including the first episode of our previous incarnation ~Ore~ Prefab Audio Extrapolations (from way back in 1998!), the infamous Dave Cloud episode which got us kicked off WRVU, and our very first podcast (hopefully I’ve gotten a little better at the intros since then).

There’s plenty more to come. We have literally dozens of episodes in the bag and several exciting ideas in the works. As always, if you want to be a part of a future episode, send an e-mail to tony@theatreintangible.com, with what you would like to try. Ben Folds and Jack White, I’m talking to you. 😉

Before ~Ore~ Theatre Intangible, there was ~Ore~ Prefab Audio Extrapolations, my college free form radio show (with co-host DaveX) broadcast at Southern Illinois University student station WIDB. Breaking Bad‘s Bob Odenkirk hosted a comedy show at the same station during his college years. The name of our first episode would become the subtitle of the series: Prefab Audio Extrapolations. Broadcast October 15th, 1998, the episode features years and years of field recordings and audio experiments by myself, my brother and my cousin, crystallized into 48 minutes and combined with television recordings, dorm-banter, unscreened-calls, and warped-up beat records.

On October 18th, 2009, seven of us got together and created a new soundtrack to the 1931 version of Dracula. Featuring such varied instruments as Theremin, Rhodes keyboard, saxophone, flute, musical saw, autoharp, and wind chimes, the episode positively leaks lushness. If you like, you can sync it up with the film. We tell you how in the intro. If you’re a fan of melody over dissonance and structure over chaos, this is the perfect starter episode for you.

For this 2007 WRVU-era episode, we explored generation loss by running sounds through multiple generations of recording. The result is the nastiest, dingiest, dirtiest show we’ve ever done. And it’s also pretty, in a broken music box kind of way.

Get It On with Dave Cloud

AKA The Show that Got Us Kicked Off WRVU. For an hour and eight minutes, Dave Cloud flirts with callers, reads from dirty magazines, takes long smoke breaks, and espouses rock star wisdom while a first class backing band lays down the groove. There’s a censor key in the WRVU control room that deletes the last three seconds from the broadcast signal. On this episode, I was using it nonstop. Despite that and the 1am broadcast time, a listener complained. The GM previewed the archived version which bypassed the censor key, and the rest is history. Contained herein is the uncensored version in all its mad, dirty, spasmodic glory.

Selecting the episode to be forever known as podcast 001 was no easy feat. Ultimately, I chose this continuation of the Halloween Extravaganza from the previous year. Featuring extended interviews with haunted house proprietors around Nashville and a near-record of 10 performers, this episode was the most ambitious and most difficult podcast to date. It was also the first of  the audio documentary episodes. If you like a good story (or a chill up your spine!), this is the episode for you.

I was getting the kinks out of a computer program that read real-time Twitter messages in a robotic voice for an upcoming live improv at PodCamp Nashville. The local publication Metromix called for an interview and asked if they could take pictures for the story. So we quickly assembled a cast of musicians in my basement to record what was essentially a photo-op. I decided to give the Twitter reading program a test run. As we set up the equipment, we learned of an 8.8 magnitude earthquake that had just hit Chile. The world was still in shock from the 7.0 magnitude earthquake that hit Haiti the previous month. I plugged the keywords “earthquake” and” tsunami” into the Twitter reader, and the resulting narration became the backbone of the show. Some of the tweeters posted on-the-scene reports, and some joked about the impending tsunamis. Others prayed for the areas affected. Some called out to loved ones. The musicians responded to the real time news with a nuanced and emotional performance, perhaps our most moving episode.

This WRVU episode was the first of what I eventually called Scoop & Loop, a technique about catching prerecorded moments and evolving them into something bigger, live and off-the-cuff. I wanted to try out two cd turntables my brother gave me, and I had no one scheduled for that week’s show. So I recorded a bunch of samples, culled auctioneer recordings from FreeSound, and burned it all onto two cd-rs. Cody Bottoms met me in the studio, and we ran the samples through loops and effects. This episode was the genesis for my solo Scoop & Loop project Adventure Bomb.

Instrument-builder extraordinaire Tim Kaiser had just finished a blistering set at the 2010 Circuit Benders’ Ball. The final bill for the night was Theatre Intangible live, with whoever we could enlist from the previous performances. We were lucky enough to get Tim Kaiser, Lola Koeune, 1/2 Mang, Jeremy Walker, and my old co-host DaveX. The result was pure magic.

A 15 foot loop of half-inch tape stretched from my reel to reel recorder to a pole in the middle of my basement. The tape loop, which kept layering over itself due to a covered erase head, gives this episode a devolving quality — a sharp contrast to the pretty psyche folk being laid down by Kyle and Kelly of Lylas and their friends. In fact, this is the prettiest episode to date.

Six tech-savvy performers loaded their favorite music apps on their iPhones and went to town. Despite the fully digital palette, this episode has a very organic feel. To my knowledge, it’s the first all-iPhone performance.

The Sound of Tape

The Sound of Teeth

Maybe it’s because we recorded this episode live to 1/2″ tape that is sounds so damn warm, so damn . . . analog! I think it had more to do with the incredibly talented musicians, including nuanced jazz drummer John Westberry. This was the second episode we recorded live to tape and the first of which to premiere on this podcast. DaveX narrates remotely via a voice recorder in Illinois. He just had his wisdom teeth removed, hence the name.

The Gospel According to Gary Mullis

While a DJ at WRVU, I often played cuts from the 2 volume compilation Songs in the Key of Z: The Curious Universe of Outsider Music. My favorite track was Gary Mullis’ “Recitation About Roy Acuff,” a spoken word country western love letter to Acuff and the Ryman Auditorium. Gary performed with more heart and earnestness than I’ve ever heard before. So you can imagine my excitement when Austin Cliffe from CMKT4 told me Gary was coming to Nashville for his yearly Ryman sojourn! We replaced his normal country western band with a free jazz quartet. The result is one of our best episodes: recitations on life, love, and the Ryman Auditorium.

The Wonderful World of Circuit Bending

Band and hacker collective Thriftsore Boratorium asked me to cover the Cincinnati experimental music festival FauxBeAnt Art Fair. I wound up recording the whole show and interviewing many of the participants. The result is a great introduction to the art of circuit bending with many of the genre’s best and brightest. The Tim Kaiser episode makes a great companion to this one.

This may be the best sounding episode to date. “Thrash violinist” Joey Molinaro, cellist Sarah Robey, and violinist Lawrence Crow carves notes onto the sand as a tape loop washes them away. I like the idea that the players try to leave their impression on the tape, but the tape gradually distorts and erodes their attempts to fight time. This is just one of those right people, right place, right time kinds of episodes, one of my favorite to date.

For our 50th podcast, we returned to WRVU for one last episode. Technically, I was permanently banned from the premises, but my station key still worked! Things got a bit out of hand when we got a call from VSC Board Member Dick Shell and a dj trainee hiding in the control booth became our “reluctant” guest. Many in the Save WRVU community didn’t find our episode lampooning the inanity of the VSC very funny. They preferred the accommodationist route and thought our satire would only fan the flames. They didn’t like our Dick Shell twitter account and were told in no uncertain terms to “cut it out.” As Mark Anundson and I knew from our previous dealings, the VSC were going to do whatever they wanted. A few months later, they announced the sale of WRVU to an NPR Affiliate. In the light of recent events, this episode sounds downright prescient.