Two must-see shows on a Monday night really means the scarcity of non-commercial music in Nashville is coming to an end.  Take tonight for instance.   I’ll be seeing T.I. participants Laurence Crow, Joseph Hudson, and 84001 at Betty’s Bar & Grill.  (More info at this previous post.)   But happening simultaneously will be this kick-ass rock concert at Open Lot: (Open Lot press release)

The Non is an experimental instrumental rock band hailing from Oklahoma City.  Drawing cues from disparate influences including Radiohead, Octopus Project, and Grizzly Bear, The Non leverages intricate musicianship and high energy levels to craft ethereal soundscapes.  NewsOK describes The Non as “one of the state’s top creative entities of any kind,” while Oklahoma State University’s publication On hails them as “Oklahoma’s most important band.”

Having recently released their sophomore album, “Tadaima,” The Non has been touring the Midwest and west coast this summer; they are dipping down South to play Austin, New Orleans, Memphis.  The group will hit Nashville up for this one night performance at Open Lot.

Nashville’s Karma Kite touts its musical produce as “indie music in its purest form.”  The instrumentation of the band’s songs, driven and decorated by banjo, xylophone, and clarinet among many others, has been compared by buzzgrinder.com to a more aggressive Sufjan Stevens.  Their influences range from Jeff Buckley to Ugly Casanova, and they are signed with indie label Cephalopod Records.

Avid Gardener has recently proclaimed, “music is not dead…and to prove it we’re releasing new stuff.”  With instrumentation that reminds us of the Arcade Fire, this Nashville-based foursome produces sound with unique, concise lyrical content, engaging melodies, and sweet drum and bass.  The group kicks off the southern leg of a mini-tour with their performance at Open Lot.

You fine folk are faced with a tough decision, and the answer depends entirely on whether you like a little experimental in your rock (Open Lot) or a little rock in your experimental (Betty’s). 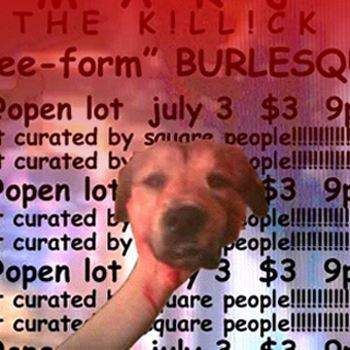 You’ll have an easier decision come July 3rd.  Chris Murray from Square People organized a one-of-a-kind-art-meets-music-exploitation-extravaganza at Open Lot, titled “Diet Blood.”  The art on display will be recreations of paintings by controversial local artist Donny Smutz.  I was over at Diet Blood contributor Drey Maynard’s house the other day as he and a crack team painted recreations of Donny’s work.  Chris explained to me that they couldn’t get Donny Smutz paintings, so they went with the next best thing. . . amateur reproductions of Donny Smutz paintings.  And that’s actually fitting, given the sampled nature of Donny Smutz’s work and the overall theme of the Diet Blood show.

At any rate, it’s a phenomenal lineup, starting with Athens experimental improv band The Killick and the legendary Dave Cloud & The Gospel of Power.  Square People, Deluxin’, and Marj will also play.  Put the firework-buying on hold and check out the show.  Here’s the Open Lot press release:

“Happenings,” forms of participatory new media art, emphasize interaction between the performer and the audience. Blurring the line between “performer” and “spectator,” “art” and “art viewer,” “Happenings” are ever-evolving, one-time experiences that depend upon audience response.  DIET BLOOD seeks to revive the Happening of the 1960s, inject it with an unhealthy dose of raw punk, and send it out, unbridled, into the Nashville scene. Featuring Dave Cloud and His Gospel of Power, DIET BLOOD also offers the stage to under-appreciated musicians such as Deluxin’, The Square People Jazz Maturity, and Marj.  Nashville-based visual artists will present new two-dimensional works, all plays on recent paintings by surrealist painter Donny Smutz.  Smutz, now located in Nashville but originally from Pittsburgh, Kansas, has described his stylized work as “a substitute for getting out and seeing the world.”  His website hails his work as surrealist art “that has more in common with the landscape of dreams than the landscape of the Midwest.”  Artists commissioned for DIET BLOOD will present takes on Smutz’s escapist work– homage, critique, or shameless copycatting?