DaveX over at Startling Moniker and I have been a little wistful lately about our old radio show  ~ORE~ Prefab Audio Extrapolations, broadcast at WIDB from 1998 to 2000.  I wrote this post about Dave’s experimental music blog and wound up reminiscing about the show we created together.  Dave fired back with a most excellent history of ~ORE here. Follow that link now and then come back.  It’s really an amazing read.  Here’s a particularly vivid excerpt.  The notes in underline are mine. 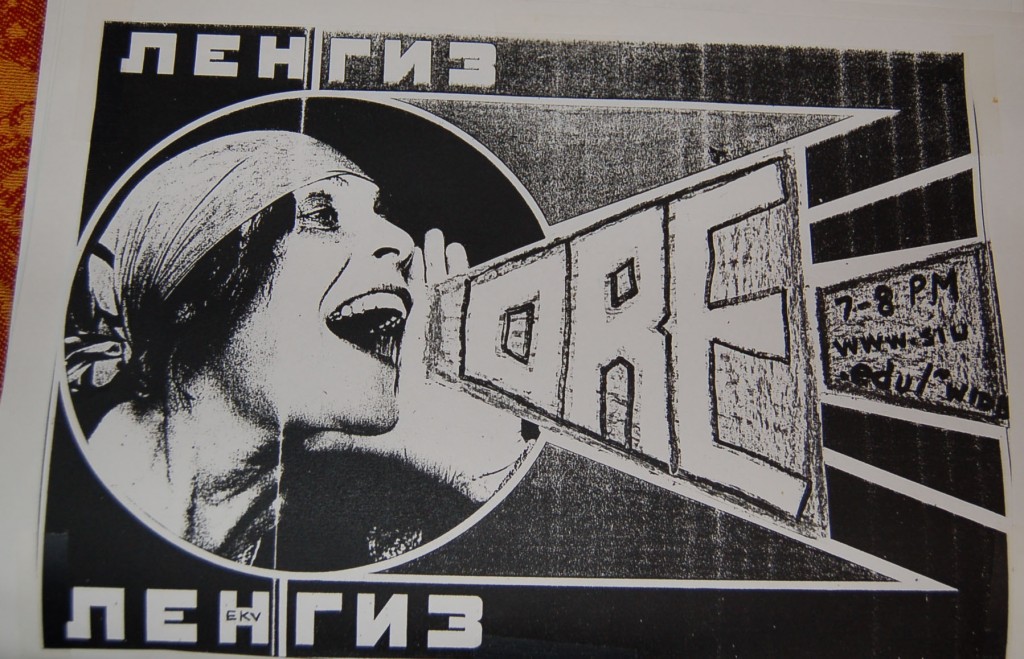 Tony and I had apparently soaked up Wu-Tang Clan’s greatest lesson, too– make it a franchise. Thus, the original ~ORE~ was endowed with “Prefab Audio Extrapolations” as a tagline. Even while fighting to keep up with a one-hour weekly broadcast, we were thinking of the future! (Now accepting franchise applications.  Who wants “~ORE~ Miami”?) At times, it seemed like anyone who was listening was actually AT the broadcasts, or helping make them. (Some things never change) Although we were doing something amazingly different on the SIU campus, we didn’t exist in a bubble.  Flyers and chalk were our outreach. Wednesday nights, we’d gather under the dim yellow lights of Faner Hall, and begin our amazingly huge chalk runs. We got our friends and family into it with us, making teams to cover as much of the 900-foot length of the breezeway as possible before the chalk bucket ran out. By morning, Faner was a pastel mess of dogs and cows spouting absurdist essays extolling the virtues of experimental radio, mixed with the inevitable Xeroxed flyers cooked up special for the occasion. Although the flyers rarely made much sense, we knew that they would reach others like us– weirdos, makers, noise-enthusiasts, record collector scum, freaks… our people.

Takes me back!  More photos and stories from the old ~ORE~ coming soon.  Stay tuned for one of the Prefab Audio extrapolation episodes to come out as a Podcast in the next few weeks.

Flashback 1998.  I’m chief engineer at WIDB student radio* at Southern Illinois University. I had my regular rock show, but I wanted more.  On a weekend home in Kentucky, I found all these old field recording and 4 track tapes full of strange noises I had recorded in middle and high school.  So I assembled them onto various forms of media and mixed them together live on the radio.  ~ORE~ Prefab Audio Extrapolations was born.  But those tapes ran out quick, so I began to invite fellow musicians in-studio to create weird noises live.  This caught the attention of one of my best friends, Dave Armstrong.  By episode three, he was an equal partner.   We chalked and flyer-ed the concrete monstrosity that is Faner Hall (after humans have gone, it will remain) with inscrutable phrases like, “What is ~ORE~!!?” and, my favorite, a bait-and-switch blasphemy that disguised itself as a campus ministry ad.  (Dave, do you still have a copy?)  We talked about the future of music and of show theme ideas as we drove to Brainiac and U.S. Maple concerts in St. Louis.

He continued ~ORE~ for a little while until the already-strained Programing Director finally broke and removed him from the air.  (Is this correct, Dave?)  That’s when he began a little show on WDBX Community Radio called It’s Too Damn Early.  They were nice enough to give him drive time . . . for truckers . . . 4am!   I thought myself fairly knowledgeable on experimental music, but after I heard Dave’s show, I realized I didn’t have a clue!  Through that show and through his popular blog Startling Moniker, DaveX (his radio moniker) blazed trails, premiering obscure micro-cassette artists and technicians of texturality that would eventually become underground heroes on the experimental circuit.  He gets cd’s sent to him from labels large, small, and bedroom; and from what I understand, he listens to everything!  DaveX writes countless reviews and hosts legendary live sessions (many by phone).  The Startling Moniker blog is necessary destination for anyone wanting to take the plunge into modern experimental music. **

It was while listening to Dave’s show that I reached the decision to begin a new chapter of ~ORE~ in Nashville on WRVU.  It was his playlists that were the basis for my own research into modern experimental music (my playlists from the WRVU years will be posted soon.)  People, there’s a whole world of new and exciting music out there, waiting to be discovered.  Go forth and explore; start here: Startling Moniker.

* Having no FM signal (and having a brilliant Chief Engineer Morgan Grammar, my predecessor), WIDB was one of the first stations with a live web feed.  I’ve only glanced at the current WIDB website for 5 seconds, and I already like it better than WRVU’s.  Reviews, charts, etc all there on the front page.

** It’s also a hoot.  Consider Dave’s unearthing of this reprimand letter from WDBX to a delinquent dj.  As funny as it is, it’s also a fine example of the proper way to reprimand a show.  State the specific offense.  Be firm yet respectful.  And most importantly, give a warning before removing the show.  Pay attention WRVU.