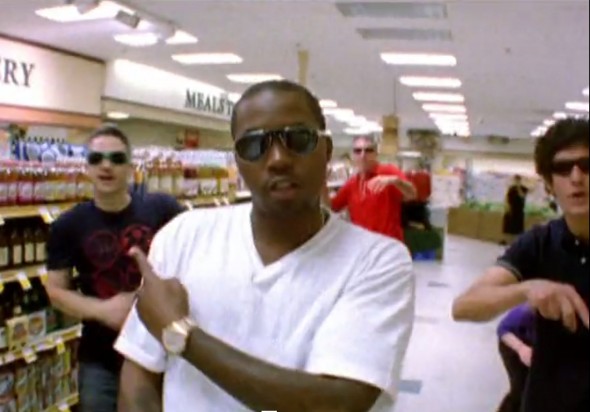 Hey, the Beastie Boys shot a video in Nashville, and it features the  Monroe Street / Rosa Parks or Green Hills Kroger Supermarket ! A fan just discovered the “Too Many Rappers” video on editor Neal Usatin’s website. Who knows how long its been there. [UPDATE: I jumped the gun on it being the 8th Avenue South Kroger. Bad Facebook intel. Now some people are swearing it’s the Monroe Street Kroger near Germantown. Others are saying it’s the Green Hills Kroger. Your guess is as good as mine.]

The video was directed by Roman Coppola and features Nas. In addition to Kroger, the boys strutted around the Nashville Parthenon, the 12th Avenue polar bears throwing snowballs, Arby’s, some train tracks, a recording studio, and Lee’s HAIR & DOLLAR.

Ad Rock even gives a shout-out to circuit benders! Or maybe it’s a diss, but I’ll take it either way:

To all you crab rappers, and hackers
And circuit benders, two-tone splendor
I.. take the cake, I stole the mold
The golden microphone, well that’s mine to hold

Big thanks to Pimpdaddysupreme for tipping me off to this. The video won’t allow embedding, so go check it out . [UPDATE: It seems Usatin’s site got hit with too much traffic, so he took the video down. But I found another copy, which I expect will also get taken down soon. Embedded below.]