It’s Sunday, January 17th, 2010 and today’s podcast is a blast from the past — Doug’s Party, a show from  ~ORE~ Prefab Audio Extrapolations.

~ORE~ Prefab Audio Extrapolations was the predecessor to ~ORE~ Theatre Intangible, broadcast from 1998 to 2000 on the student run radio station WIDB on the campus of Southern Illinois Universty in Carbondale, Illinois.  The show was hosted by myself and Dave Armstrong, now the blogger DaveX on the popular experimental music blog Startling Moniker.  Doug’s Party was the 13th episode of that show and the first Prefab Audio Extrapolation-era show of this podcast.  We hope to bring you more of the old shows in the coming months.

Doug’s Party was based on recordings we made during a college party thrown by our friend Doug Bigham.  It’s a time capsule of 1999.  Clinton was president.  The Matrix had just been released. Listening to this show 10 years later brings back a lot of fond memories, some cringes, and some surprises.  The soundtrack is filled with instrumental versions of songs I was writing at the time – many of which I’d forgotten about.

Despite everything, Doug’s Party holds up pretty well.  It’s a bit juvenile, and a bit too beat-driven (although I think that was part of the joke), but it really does capture a time in my life, all my awkwardness, and all my hang-ups.  Perhaps it will do the same for you.  I’ll end this intro with the text from a flyer I wrote in April of 1999, promoting the premiere broadcast of the episode.  Enjoy.  – Tony Y.  January 2010

P.S.  Almost forgot to mention — the intro music was pulled from a WRVU-era Theatre Intangible episode called Jazz Moped.  It gives the intro a film noir feel.  Look for the whole episode as a podcast soon. 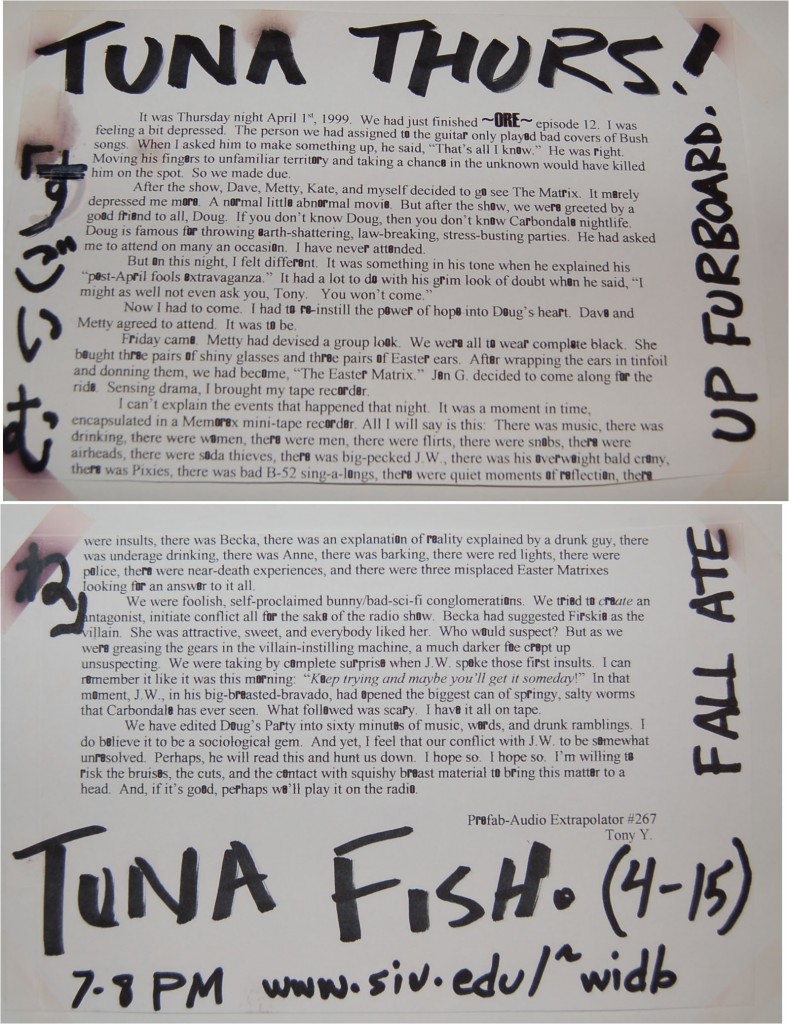 It was Thursday night April 1st, 1999.  We had just finished ~ORE~ episode 12.  I was feeling a bit depressed.  The person we had assigned to the guitar only played bad covers of Bush songs.  When I asked him to make something up, he said, “That’s all I know.”  He was right.  Moving his fingers to unfamiliar territory and taking a chance in the unknown would have killed him on the spot.  Se we made do.

After the show, Dave, Metty, Kate, and myself decided to go see The Matrix.  It merely depressed me more.  A normal little abnormal movie.  When we left the theatre, we were greeted by our good friend Doug.  If you don’t know Doug, then you don’t know Carbondale nightlife.  Doug is famous for throwing earth-shattering, law-breaking, stress-busting parties.  He had asked me to attend on many an occasion.  I have never attended.

But on this night, I felt different.  It was something in his tone when he explained his “post-April fools extravaganza.”  It had a lot to do with his grim look of doubt when he said, “I might as well not even ask you, Tony.  You won’t come.”

Now I had to come.  I had to re-instill the power of hope into Doug’s heart.  Dave and Metty agreed to attend.  It was to be.

Friday came.  Metty had devised a group look.  We were all to wear complete black.  She bought three pairs of shiny glasses and three pairs of Easter ears.  After wrapping the ears in tinfoil and donning them, we became, “The Easter Matrix.”  Jen G. decided to come along for the ride.  Sensing drama, I brought my tape recorder.

We were foolish, self-proclaimed bunny/bad-sci-fi conglomerates.  We tried to create an antagonist, initiate conflict all for the sake of the radio show.  Becka had suggested Firskie as the villain.  She was attractive, sweet, and everybody liked her.  Who would suspect?  But as we were greasing the gears in the villain-instilling machine, a much darker foe crept up unsuspecting.  We were taken by complete surprise when J.W. spoke those first insults.  I can remember it like it was this morning: “Keep trying and maybe you’ll get it someday!”  In that moment, J.W. in his big-breasted bravado, had opened the biggest can of springy, salty worms that Carbondale has ever seen.  What followed was scary.  I have it all on tape.

We have edited Doug’s party into sixty minutes of music, words and drunk ramblings.  I do believe it to be a sociological gem.  And yet, I feel that our conflict with J.W. to be somewhat unresolved.  Perhaps he will read this and hunt us down.  I hope so.  I hope so.  I’m willing to risk the bruises, the cuts, and the contact with squishy breast material to bring this matter to a head.  And, if it’s good, perhaps we’ll play it on the radio.