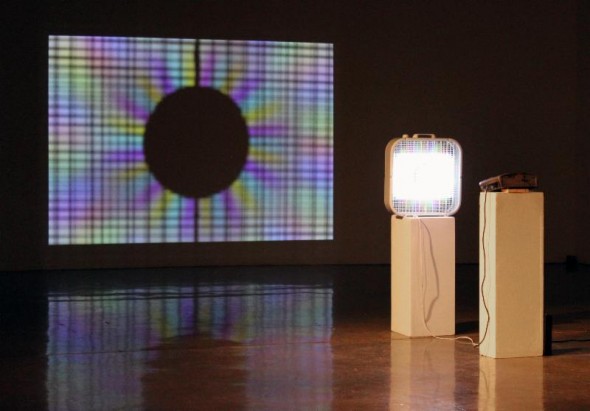 The March 1st Arts & Music @ Wedgewood/Houston is an art crawl you can’t miss. The David Lusk Gallery adjacent to Zeitgeist is opening to the public for the first time. Seed Space is exhibiting a killer show featuring Travis Janssen’s multi-media installation “Conversion/Convergence,” an ingenious projection through a box fan. Nearly all the WeHo galleries have new exhibits, including Ovvio Arte, Zeitgeist, 444 Humphreys, Julia Martin Gallery and Ground Floor Gallery.

I helped put together two shows at the Track One warehouse that I’m incredibly excited about. From 5:30 to 9 p.m., Nashville experimental/electronic artist Carl Oliver will stand in the center of the huge Track One warehouse and perform a longform modular synth improvisation. Because it’s modular, he’ll be rerouting patch cables on the fly. It’s going to be especially cool after the sun goes down. Imagine walking into the warehouse to find a distant figure lit by a single lamp. Walk around the giant room and explore its natural reverb as the music interacts with the space. Check back throughout the night to hear how the improv evolves. Learn more about the Track One events at the Facebook event page.

A little after 9p.m., the space will transform into a giant multimedia experience for the glitch art showcase LightJazz. Morgan Higby-Flowers is curating a show featuring Watkins visiting artists Nick Briz and Jon Satrom and several Nashville new media artists. The event is a part of Higby-Flowers’ RipZipRarLANd, four day event featuring Briz and Satrom. RipZipRarLANd starts with a NO MEDIA show at Noa Noa and ends with a Watkins gallery opening. Learn more at the RipZipRarLANd Facebook event page.

Join us for the March 1st edition of Arts & Music @ Wedgewood/Houston, featuring the public unveiling of the David Lusk Gallery!

Featuring the galleries and businesses:

Art dealer David Lusk, who established his Memphis gallery in 1995, is opening a new 2,500-square-foot gallery in Nashville on March 1 beside Zeitgeist Gallery. The opening exhibition will feature mixed-media works by 23 artists, including 13 from Tennessee, among them Maysey Craddock, Kit Reuther, Mary Addison Hackett, William Eggleston, and the estate of Ted Faiers.

Allie Kuzyk’s works rely on systems and visual hierarchies to present her playful illustrations rooted in pop culture headlines. Her multimedia installations are both light hearted and challenging and reinterpret the idea of boring old infographics.

Julia Martin Gallery is proud to present the work of one of Birmingham’s finest, Megan Kimber. The spirit of her work is potent. Her execution, so delicate and graceful one can imagine the figures having blossomed from the very fibers of the surface upon which her brush applied them.

Walk in to Ovvio on Saturday night and participate in Veta&Theo’s NEW PHOTOGRAPHIC PORTRAIT SERIES. Bring your head, they’ll shoot it. Part of the Arts & Music at Wedgewood/Houston First Saturday crawl. Have no fear – it’s just a camera.

Join Seed Space for the next Professional Development Workshop, The Voice of Criticism in Contemporary Art, with Possible Press founder Rachel Reese.

Matt Gilbert’s “Font Flowers” are a series of prints which examine typography design.

Travis Janssen’s multi-media installation “Conversion/Convergence” consists of a series of prints and a projection filtered through an altered box fan, creating a hypnotic pinwill image of rainbow colors on a wall.

Carl Oliver performs a longform modular synthesizer improvisation in the Track One warehouse. Walk around the giant room and explore its natural reverb as the music interacts with the space.

9 p.m, Live in the Track One warehouse: LightJazz, free

I can’t resist posting a few more of Carl’s modular synth experiments. Check out his YouTube channel for more.

The first show is a NO MEDIA event on Friday, February 28th at 7:30 p.m. here at Theatre Intangible headquarters aka Noa Noa house. NO MEDIA is, as its website states, “an open improvisational realtime/performance media art event.” By “open,” they mean ANYONE can participate, including you. All types of expression are welcome, including music making, acting, dance, singing, visual art, poetry, storytelling, puppetry, etc.

Here’s how it works. When you arrive, you put your name in a hat. The hosts then draw three names. If your name is called, you have two minutes to prepare. Then you perform for 10 minutes with your two randomly-chosen collaborators. This is repeated until all the names are drawn. No documentation is allowed. It happens once and in realtime.

What makes this particular NO MEDIA event special is the fact that NO MEDIA co-creator Nick Briz will be performing alongside the locals. If you use Facebook, you can find out more on the Facebook event page. If you’re interested in performing, contact Morgan at mhigbyflowers@gmail.com.

The second show is glitch media show happening at the Track One warehouse during the March 1st Arts & Music @ Wedgewood/Houston. At 9 p.m. the warehouse will transform into a massive multimedia experience. The show will explore digital culture, glitch art, hacking, remix culture, and experimental new media. Morgan is seeking Nashville electronic and experimental musicians and video-makers to perform. Here’s the Facebook event page. If you’re interested in performing, contact Morgan at mhigbyflowers@gmail.com. Make sure you specify which event you’re applying for.

Incidentally, there’s another great event happening earlier that night in the same space. From 5:30 p.m. to 9 p.m., Carl Oliver will perform a longform modular synth improv. What makes this especially cool is that he will be performing in the center of a HUGE empty warehouse. The natural reverb is going to be out of this world. I’ll write more about this closer to the date, but in the meantime, check out the Facebook event page.

The two Nick Briz / Jon Satrom events are part of RipZipRarLANd, a four-day series sponsored by Watkins College. The series also features lectures, workshops and a gallery opening. Check out the full schedule on, you guessed it, the Facebook event page.

Nick Briz is a new-media artist, educator and organizer whose work has been shown internationally at festivals and institutions and is openly and freely available on the web.

As [users/artists] we consider ourselves [creators/producers], however, in the eyes of contemporary (networked) corporations, we are the product being sold for billions of dollars. These wide-spread software-as-service models don’t trade in their technology as much as they trade in humans. SoftwARE iz Humans…

RipZipRARLANd’s piratical inhabitants employ messy and dirty experimental processes. Their digital practices have grown out of the infinite copy-ability of data and inevitable decay of digital media. They hack, reclaim, remix and share in an effort to promote and preserve a genre/medium/culture.