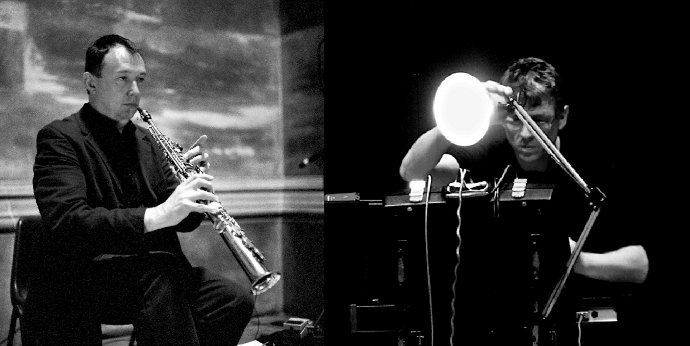 The Nashville Scene asked me to write a critic’s pick on this show. I’m allowed to quote myself, right?

Thanks to forward-thinking programming by the Nashville Symphony and the Blair School of Music, and the tireless efforts of people like Chris Davis, Leslie Keffer, Brady Sharp and David Maddox, Nashville is finally beginning to embrace avant-garde. If you enjoy expanding your musical horizons, consider free improvisation duo Thomas Lehn and John Butcher a trade-your-firstborn-to-attend event. They are two of the most important players in the European free improv scene. Lehn plays unearthly sounds out of an EMS Synthi A, a unique 1970s analog synthesizer that supplants the Moog-style patch bay for a matrix of Battleship-like resistor pegs. His sputtering, crackling, and at times combative timbres are just as unique as the instrument he plays, and a far cry from the soothing tones of ambient electronic music. If Evan Parker is the pioneer of extended saxophone technique, John Butcher is the lab scientist. Formerly a theoretical physicist, Butcher meticulously catalogs every sound he discovers on the sax — and I do mean every sound. Where most musical adventurers remain content mapping out the big spaces in the middle, Butcher charts every crack, crevice and blind alley. He’s famous for treating the room as an extension of the instrument (having recorded in caves, oil tanks and underground reservoirs), and you can be sure the amazing acoustics of the chapel at DPC will play a big part in both players’ performances. Mass at Dawn helmer Dylan Simon will open with a new work for analog synth based on the Sumerian myth of Inanna. He told me he aims to open a portal into the dream world by manipulating our everyday environment — equal parts opera, science experiment and mass hallucination.— Tony Youngblood

Couldn’t have said it better myself! More info on the Facebook event page.