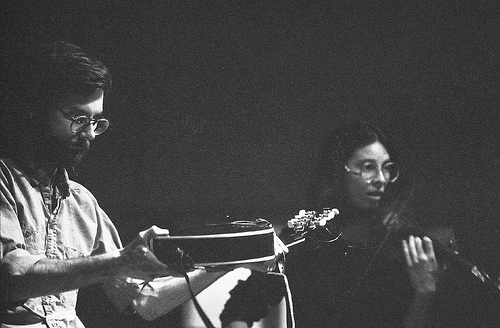 I’m short on time at the moment, but I wanted to post something quick about Thursday’s Zeitgeist Indeterminacies with LaDonna Smith and Davey Williams. It’s a can’t miss!

Here’s what moderator Brady Sharp had to say about the show over at Voight-Kampff Music:

Davey Williams started playing guitar at age 12.  Throughout college, he played in a number of jazz and soul bands.  Davey went on to join Curlew in the late 80s, led by saxohonist George Cartwright, and whose revolving membership included Fred Frith, Bill Laswell, and Tom Cora among many others.  Curlew, along with Last Exit, Naked City, and others were one of the seminal bands to form the “Knitting Factory Sound” in New York.

Since Curlew, Davey has been in many punk rock and improvisational groups, and worked extensively with drummer Ikue Mori and the legendary Col. Bruce Hampton, ret., among many other.  He’s also a freelance writer and music critic.

LaDonna is the Director of the Birmingham Suzuki Violin Association, on Faculty at the Central Pennsylvania Suzuki Institute, is a current adviser for the International Society of Improvised Music, and publisher/editor-at-large for The Improvisor: the Journal for Improvised Music, started with Davey in the mid 70s, and continuing to this day on the web.  She is an active organizer of concerts and festivals in the Birmingham area.

LaDonna and Davey met at the University of Alabama in Tuscaloosa, and they fell into a crowd which included Craig Nutt(now in Nashville).  They proceeded to create their own form of music based on Dada, Surrealism, and experimental ideas in general.  What came out of that was a live album called “Raudelunas Pataphysical Revue” by Ron ‘Pate and the Debonairs, featuring the Reverend Fred Lane, a strong concoction of meandering big band music, free improvisation, and industrial noise, combined with surreal Vaudevillian wisecracks and soliloquies.  They soon discovered Derek Bailey’s “Topography of the Lungs”, FMP Records, and the whole European Free Improvisation movement that was developing simultaneously in Europe as they were.  They formed their own record label TransMuseq, and they put on many surrealist theater and other events in the Birmingham area, forming long term relationships with similar artists around the world, and they toured the world together for many years as the Trans Duo.

It’s always a special treat to see these two improvising jewels of the south play together.  Expect lots of humor, storytelling, and amazing extended instrument technique, followed by the usual insightful discussions that “Indeterminacies” offers.