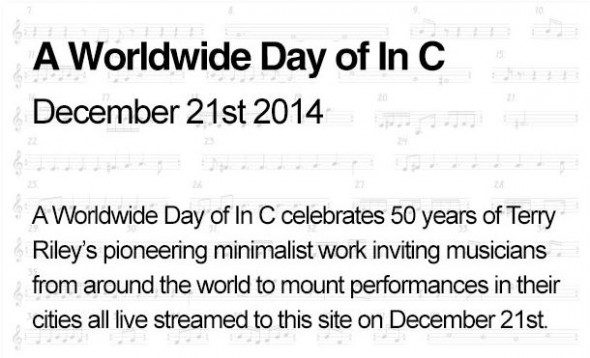 Make Music Nashville and percussionist Jesse Strauss are looking for musicians to perform Terry Riley’s seminal composition “In C” on Sunday, December 21st together with artists from around the world. Nashville is one of over 20 cities contributing to A Worldwide Day In C.

The project site has the details:

Consisting of 53 individual repeated cells with no time signature, no instrumentation limitations, and only a small set of instructions, In C’s interlocking repetitive patterns provided a new concept in musical form that was to change the course of 20th century music. Considered the first minimalist composition and perhaps the first truly globalist composition, In C can be played by any number of musicians, in any location in the world, with any musical tradition and instrument type.

Inspired by the communal spirit of Riley’s work and the composition’s 50th anniversary this year, “A Worldwide Day of In C” unites musicians from all over the globe in a day-long celebration of music and community with live-streamed performances occurring throughout the day with a variety of ensembles in over 20 cities around the world.

If I understand correctly, the Nashville group won’t be performing live with the other groups around the world. Each groups plays at an appointed time, and listeners around the world can stream the various ensembles all day. The Nashville performance is set for 5 to 6 p.m.

If you’re interested in participating, apply here. For questions — or if you want to attend the concert but not participate — contactl Jesse at JesseAstrauss@gmail.com.