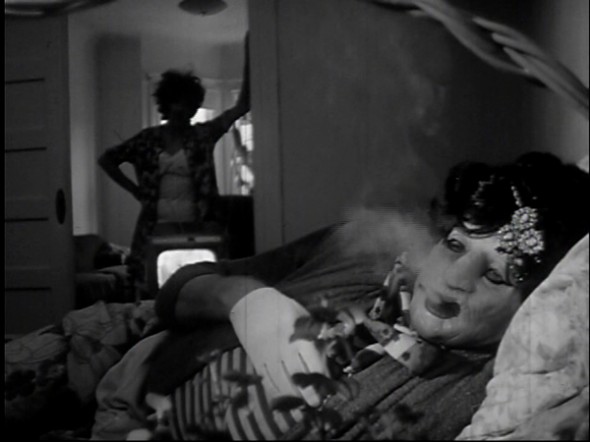 Third Man Records and the Belcourt Theatre bring another wonderful selection to the experimental film series Light and Sound Machine. Tonight’s film is legendary underground filmmaker George Kuchar’s The Devil’s Cleavage preceded by his short Hold Me While I’m Naked. Read the below quote, watch the trailer for the enormously-entertaining Kuchar brothers doc It Came from Kuchar, and be at Third Man tonight!

“George Kuchar’s lovingly farcical re-creation of those (Forties and Fifties) melodramas, THE DEVIL’S CLEAVAGE, is a camp parody that sometimes directly steals from the genre, sometimes burlesques it, and often travesties it. As you might expect, it soon begins to mock all kinds of cinematic references, from Hitchcock to Preminger. But leave the exact details to pedants, laughter’s the thing here . Kuchar manages terribly well in terms of imagination and inventiveness, and just plain terribly in terms of such humdrum details of filming as using a light meter and tape recorder. Technical ineptness aside, we end up with a marvelous hybrid, as if Sam Fuller and Sternberg had collaborated in shooting a script by Tennessee Williams and Russ Meyer. Which is to say that excess is the most basic element of Kuchar’s method, even when (almost paradoxically) it’s an excess of cliche (‘Such language! Bite your tongue!’ ‘Bite it for me!) Douglas Sirk tells us, ‘Cinema is blood, tears, violence, hate, death, and love.’ Kuchar reminds us that cinema, like life, is also bedpans, earwax, sleazy fantasy, ineptness, compromise, and laughter.” — Chuck Kleinhans, Film Center program

The Light and Sound Machine presents The Devil’s Cleavage
Thursday, January 16th, 2014. 7 p.m.
$10 at door or $8 in advance for Belcourt members. 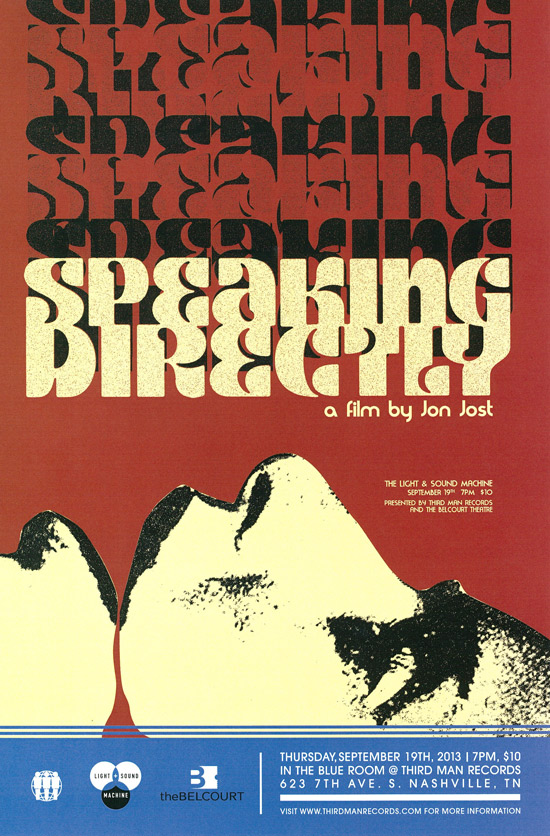 Third Man Records and the Belcourt Theatre bring you the next installment of the experimental film series Light and Sound Machine. Thursday’s film is Speaking Directly.

Attempting the summarize SPEAKING DIRECTLY, the first feature by the defiantly independent American auteur Jon Jost, is a bit of a feat. Like nearly all his subsequent films, it was produced on a pauper’s ransom, in this case a meager $2500 loan from Jost’s wealthy ex-lover. Yet, having been produced shortly after Jost’s release from prison for draft resistance, the culmination of two-plus years worth of ideas on cinema and society explode off the screen as though they were conceived in a pressure cooker. Its collage of kitsch Americana, socio-political essays, home movies, and interpersonal interviews opens itself to a myriad of interpretations. Self-described as a “State of the Nation address, from the perspective of someone other than the President”, it also serves as exploration into the complexities communication, an audit of one’s own existence, and can even be seen as a precursor to the sort of reporting by way of personal experience popularized today in outlets like NPR’s THIS AMERICAN LIFE. However you choose to read Jost’s impressive and complicated debut, one thing is for certain, as critic Jonathan Rosenbaum noted, you can think of no other film quite like it.

I pulled that quote from the Belcourt and Third Man sites.

Over on the Nashville Scene Country Life blog, Jim Ridley has a great write-up about Speaking Directly as well as previews of upcoming Light and Sound Machine picks. (Hint: buy your tickets in advance for the October screening!) 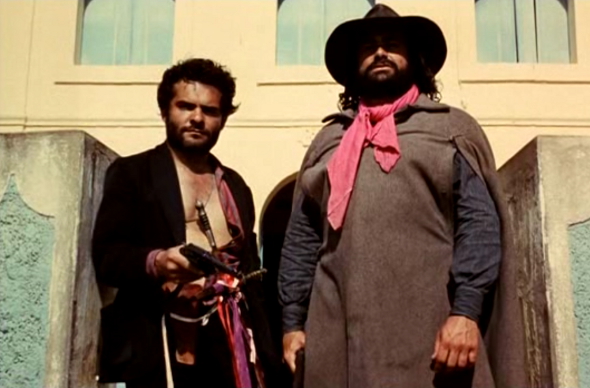